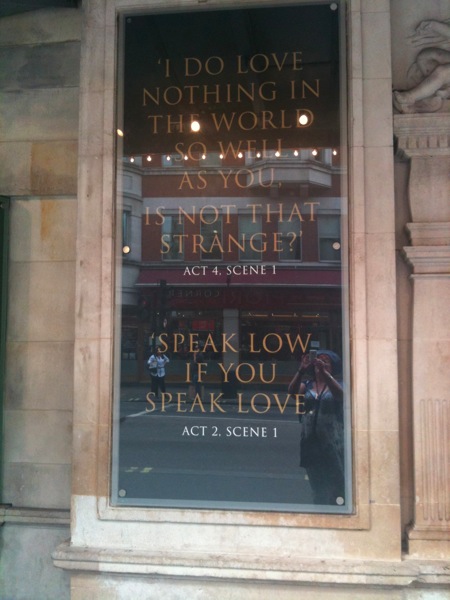 I have decided to blog about the first night of the Tate/Tennant Much Ado About Nothing (Wyndhams) experience and in doing so this blog post will include SPOILERS.  I don’t normally blog about a production early in the run, but I felt there was something rather fascinating about being at a first night in the same way there was something special about attending the last matinée/night of the long ensemble in Stratford in April. I wanted to talk about that experience as well my first thoughts of the production.

The traffic on Twitter made it clear that many audience members were fans of David Tennant, so that the audience would generally be with the actors, and that created a really energetic atmosphere.

The auditorium was full, and very hot. I think that the play started about 5 minutes late, because there were so many people finding their seats.  The set was concealed by a white curtain, and not visible when entering the auditorium, which built up the anticipation. When the switch off the phone warning was announced, the curtain rose straightaway and the production began with Hero dancing to some 80s music (I can’t recall what).

Overall, I thought the production was slapstick in approach, and in the tradition of pantomime, but I don’t mean that in a negative way. There’s the equivalent of the pie in the face, an inventive use of a stage harness and cross dressing.  I felt that the creative team had made the decision to play up every line, and Much Ado About Nothing is a comedy, so I’d expect it to be funny, and this production was very funny.

As soon as Catherine Tate said her first line as Beatrice, it became clear that she is going to use her well tried stock of voices and expressions, and though she never says ‘am I bovvered’ Lauren Cooper style, it is possible to believe this Beatrice could have uttered this in her past. Alongside Tate’s performance, David Tennant uses exaggeration to great effect when playing Benedick.  For example, Benedick’s (or indeed really I should say Tennant’s ) entrance was very much one Berwick Kaler might make at the annual York Theatre Royal pantomime.  I felt that having such an explosive entrance dealt with the issue how do you get David Tennant on stage. Rather than trying an approach that might get some laughter and a ripple of applause, why not go for an entrance which will  maximum impact?

The problem I felt in playing the comedy at this level throughout is that it is difficult to change gear in the Watch scenes, and highlight the farcical nature of the scenes. I also felt that the ‘Kill Claudio’ scene might be a scene that they need to work on.  I think that Beatrice is still emotionally drained in that scene and though there are humorous moments, I think it might be a moment to tone down the facial expressions, because after the words ‘Kill Claudio’ punctures, it is hard for her to move back to the serious tone needed for the rest of the scene. Much Ado About Nothing nearly turns to tragedy and a production needs to explore the darker moments as well as the comic moments.  In this production, there is a suggestion that Claudio (Tom Bateman) is deeply affected by the shaming of Hero.

There are strong performances from other members of the cast. I felt that Adam James was a melancholic Don Pedro, who was a little sad at Beatrice’s rejection. I think the approach to Hero (Sarah MacRae) was one of the most interesting aspects of the production.  However, I thought Elliot Levey’s Don John was too much like a pantomime villain.  It might have been more interesting to have a melancholic Don John to contrast with Tate and Tennant’s comedy performances.

The revolving stage was used to great effect, particularly in the overhearing scenes.

The audience loved it, laughed throughout and cheered and clapped when Benedick proposed to Beatrice. Needless to say that there was a standing ovation at the end.  It will be interesting to see if there are regular standing ovations through the run.

When I see this again, I will never get that sense of surprise in not knowing what’s to come, though it will give me an opportunity to consider the production in more depth. I am sure time will give me chance to consider and reflect on the detail more and blog again later in the run.

One of the nice things about the evening was that I met @PolyG, @RevStan and @tprw and found their views on the production really engaging.